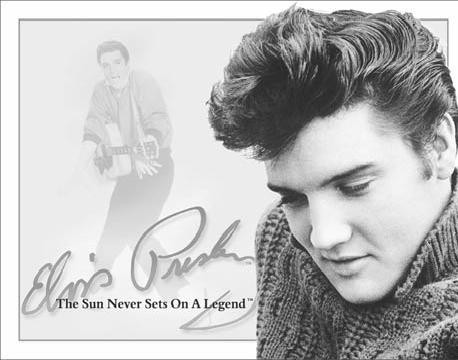 Popular music icon Elvis Presley dies in Memphis, Tennessee. He was 42. The death of the “King of Rock and Roll” brought legions of mourning fans to Graceland, his mansion in Memphis. Doctors said he died of a heart attack, likely brought on by his addiction to prescription barbiturates.

Elvis Presley was born in Tupelo, Mississippi, on January 8, 1935. His twin brother, Jesse, died during the birth. Elvis grew up dirt-poor in Tupelo and Memphis and found work as a truck driver after high school. When he was 19, he walked into a Memphis recording studio and paid $4 to record a few songs as a present to his mother. Sam Philips, the owner of the studio, was intrigued by the rough, soulful quality of his voice and invited Presley back to practice with some local musicians. After Philips heard Elvis sing the rhythm-and-blues song “That’s All Right,” which Presley imbued with an accessible country-and-western flavor, he agreed to release the rendition as a single on his Sun Records label. The recording went to the top of the local charts, and Presley’s career was launched.

During the next year, Elvis attracted a growing following in the South, and in 1955 Sun Records sold his contract to a major record label, the Radio Corporation of America (RCA), for a record $40,000. His first record for RCA was “Heartbreak Hotel,” which made him a national sensation in early 1956. He followed this up with the double-sided hit record “Hound Dog”/”Don’t Be Cruel.” In September 1956, Elvis appeared on The Ed Sullivan Show, a national variety television show, and teenagers went into hysterics over his dynamic stage presence, good looks, and simple but catchy songs. Many parents, however, were appalled by his sexually suggestive pelvic gyrations, and by his third appearance on The Ed Sullivan Show, Elvis was filmed from only the waist up.

From 1956 through 1958, Elvis dominated the music charts and ushered in the age of rock and roll, opening doors for both white and black rock artists. During this period, he starred in four successful motion pictures, all of which featured his soundtracks: Love Me Tender (1956), Jailhouse Rock (1957), Loving You (1957), and King Creole (1958).

In 1958, Presley was drafted into the U.S. Army and served an 18-month tour of duty in West Germany as a Jeep driver. Teenage girls were overcome with grief, but Elvis’ manager, Colonel Tom Parker, kept American youth satiated with stockpiled recordings that Presley made before his departure. All five singles released during this period eventually became million-sellers.

By the end of the 1960s, rock and roll had undergone dramatic changes, and Elvis was no longer seen as relevant by American youth. A 1968 television special won back many of his fans, but hits were harder to come by. His final Top 10 entry, “Burning Love,” was in 1972. Still, he maintained his sizable fortune through lucrative concert and television appearances.

By the mid 1970s, Elvis was in declining physical and mental health. He divorced his wife in 1973 and developed a dangerous dependence on prescription drugs. He was also addicted to junk food and gained considerable weight. In the last two years of his life, he made erratic stage appearances and lived nearly as a recluse. On the afternoon of August 16, 1977, he was found unconscious in his Graceland mansion and rushed to the hospital, where he was pronounced dead. He was buried on the grounds of Graceland, which continues to attract fans and has been turned into a highly successful tourist attraction.