Date When Celebrated: The first Friday in October 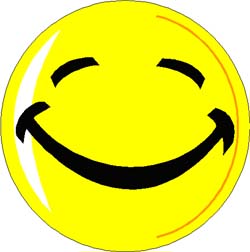 World Smile Day celebrates the ever popular yellow smiley. It also offers us an opportunity to do an act of kindness. According to the World Smile Day website, a proclamation of this day was made by the U.S. Congress. Now that should put a smiley on your face.

The intent of World Smile Day is to do an act of kindness, or help one person to smile. Why not do both!?

About the Smiley Face:

Harvey Ball, a commercial artist from Worcester, Massachusetts created the smiley face in 1963. The State Mutual Life Assurance Company hired Harvey as a free lance artist to create a smiley face for use in improving company morale. From there, the bright and cheerful smiley grew in popularity. It’s popularity grew slowly at first. Then, it exploded in the 1970’s. Ultimately, the smiley became wildly popular.

There is some controversy over the smiley’s creation. French entrepreneur named Franklin Loufrani claimed to have invented it in 1968. In 1971 he patented it in 80 countries.

Harvey Ball of Worcester Ma. created World Smile Day. Concerned about over commercialization of his smiley, he felt one day a year should be dedicated to smiling and doing acts of kindness.